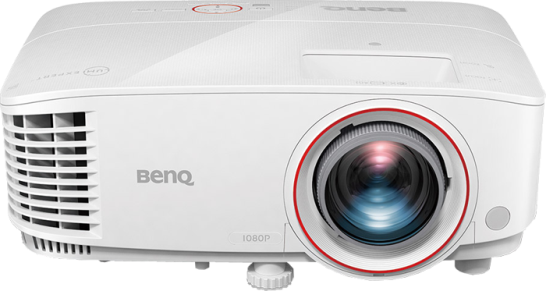 short focal projector? Projections are normally done as in the cinema with projectors placed in the middle of the room. This projectors are designed to broadcast a bright and colorful image, with very good contrast. Some are tempted by the ease of installation of a short throw projector or ultra short focal length. How far […]

Projections are normally done as in the cinema with projectors placed in the middle of the room. This projectors are designed to broadcast a bright and colorful image, with very good contrast. Some are tempted by the ease of installation of a short throw projector or ultra short focal length. How far can we go?

Short Throw or Ultra Short Throw are equipped with a distorting lens. This projectors allowing you to project a large image without the need for recoil, much big glasses. This kind of projector can be positioned within 1 meter of the screen, or even a few centimeters from a wall. To know the distance of recoil, an indicator called “ratio” is given. A standard projector has a “normal” ratio between 1.3 and 2.7. A short throw projector will have a ratio of about 0.49 to 0.76. An Ultra Short Focal Projector will have a ration of 0.15 or 0.20.

Be careful however to the projected image. Ultra Short Focale projectors aim to project a large image being placed a few centimeters. They deform so enormously the image that can not be projected on a screen and requires a rigid and perfectly flat wall. But a wall will never be perfect … Originally designed for school whiteboards, there are many these projectors in supermarkets where the quality of projection is not sought. So if you just want to see a “big picture” these Ultra Short Focallights are enough. If you want to have a good contrast, it will be better to choose  more conventional projectors. Abandon the Ultra Short Focal for at least favor a short or medium focal length.

Placed at about 1 meter distance, Short Focal projectors begin to restore an image worthy of the name. Colors are shimmering, contrast is between 10,000 and 20,000 for 1, so minimum but sufficient to project TV or game console.
Among  Courte Focale projectors, we were able to appreciate two projectors in particular: the BenQ TH671ST and the Optoma EH200ST.

– BenQ Th671ST: this projector is available from 750 € for the public, so really accessible. It allows many beginners to access the projection at a low price, with a beautiful image. With a ratio of 0.69 to 0.76, this projector can be placed about 1.50 meters from the screen, (on your coffee table for example) and displays a large image thanks to its 3000 lumens brightness. Its contrast of only 10,000: 1 is minimal, but a good screen can enhance the image. BenQ recommends this model for gamers, thanks to the responsiveness of this projector for games.

– Optoma EH200ST: this projector is accessible from 1110 € only for public. It can be placed only 1 meter away. Associated with a good screen, this projector displays a very nice colorimetry. Its 3000 lumens brightness allows to project without requiring a perfectly black room, and 20.000: 1 contrast (which justifies prices) makes it possible to reinforce the beauty of the colors.

In conclusion, if you have no perspective at home, you can still enjoy a great image in your living room thanks to projectors Short Focal you will find here in our packs “Screen + projector”.  But beware of Ultra Short Focal … 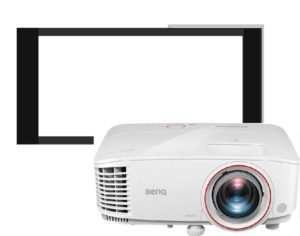