Business consulting in 1995, then trainer, Eric Suteau used for years like any other professional, the traditional blurred projectors and screens curling at the ceiling.  In 2000, the advent of the Internet and DVDs led to the emergence of Internet forums on which the first users planned to use their company’s projectors to project their films at home on weekends: but the scrolling ceiling screens were used to curling and the use of a fixed screen required isolation in a dedicated room. For several years, Éric Suteau listed the needs expressed by Internet users on the forums and came to the conclusion that a new generation of screens was needed, allowing the advantages of a dedicated room and the small footprint of a screen wrapped around the ceiling. In 2003, a new trend emerged: interior decoration emissions. More and more, objects were no longer hidden but became ornamental objects: refrigerators, televisions, computers became designs.

As for the companies, they were going to make more and more use of new technologies, in particular to equip their meeting rooms and seminar rooms. In 2005, the simpler to use digital televisions, providing a sharper image, began to replace the old projectors and curling ceiling screens that were hovering. But these televisions provided a picture that was too small for use in the meeting room: companies wanted to continue to have a large image, and without having a big ugly black screen when the television was unused. Finally, the meeting rooms became more and more welcoming, with furniture, equipment and decoration contributing to the well-being and success of the meetings. Today, meeting participants use smartphones, PCs, Macs and networks.

For these 2 types of users, a new generation of screens was needed, allowing them to project everything in large size and high definition, while integrating perfectly into the decoration of our interiors such as meeting rooms and seminars: the DesignScreen screen for High Definition projections was born 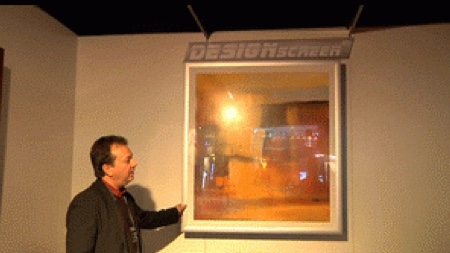 Éric Suteau was an amateur filmmaker, Eric Suteau has always lived with projection screens: portable, scrolling, manual or electric, grey or pearl white… All had advantages, but all tended to curl up and then needed to be stored after use. When the use of the projector became more widespread in 2005, it was clear that users would experience the same disadvantages, since the screens had remained unchanged for 40 years.

Knowing the characteristics and limitations of traditional projection screens, mainly manufactured in Asia, Éric Suteau has looked for a way to combine the advantages of a fixed screen that provides a perfectly flat image, an electric screen that takes up no space, a tensioned screen that doesn’t gondle, to rethink the design so that the screen is always ready for use without having to store it and that it becomes the ideal solution. Éric Suteau invents the tryptic screen, both fixed, tensioned, foldable, ornamental painting and allowing a total personalization with the decoration of each one. Prototypes, patents, brand, design development, customization of each screen, adventure made in France with a big “A”.

Individuals want to use projectors to project more than just DVDs, and companies are no longer limited to slide show projections. Consumers now want to project their best video games and Box TVs on a very large screen.

Businesses want to project their company presentations on a large screen, connect their smartphones, make videoconferences, and animate their meetings with interactive screens. Éric Suteau is therefore upgrading its DesignScreen screens to distinct ranges: gray screens for gamers, the world’s only interactive projection screens for companies and seminar rooms. In 2017, the new generation of DesignScreen projection screens is expanded. The history of the small company Tourangelle continues…